The above dress is indeed KNIT! While it does not use traditional yarn nor does it use traditional knitting, it was newsworthy for knitting inspiration with a tech slant. What’s extra cool is it uses an oldish, sort of outdated, form of knitting called Loom Knitting. It’s a fun modern marvel with an old school twist!

The above dress is hand knit using a knitting loom. At first I could not figure out if it was knit and if so what kind? But I checked out the Construction of the Fluid Dress post on their website. The photos showed what looked like a flat ring with pegs and a great shot of the dress being knitted. It’s knitted in a tubular fashion! Not unlike Circular Knitting however it just uses a loom. She also crafted the knitting loom itself!

O yeah and there is indeed fluid coursing through the dress! I didn’t read too much into the mechanics of the dress itself. But from what I gathered, colored mineral oil is being pumped through the clear plastic tubing that is being used for “yarn”. The rest of the dress is simply being backlit to appear tinted. Find out more about the Fluid Dress, Casual Profanity, and Charlie Bucket (who I think made the dress!).

Loom Knitting is basically any type of knitting that uses pegs that are mounted on a board called knitting looms. They can be round or long boards or any shape! Sometimes they resemble toy railroad tracks but with pegs instead of tracks. The easiest way to describe it is with pictures! It’s a whole new ballgame in a sense, the knitting is done with a different perspective and mostly produces tubular knits but this form of knitting has been around for as long as needle knitting. 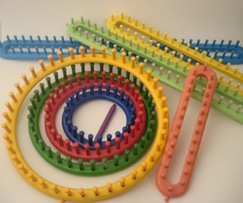 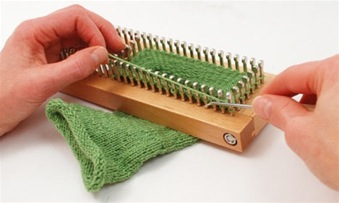 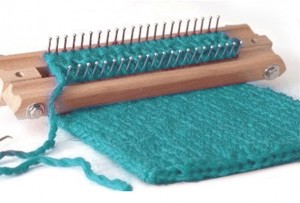 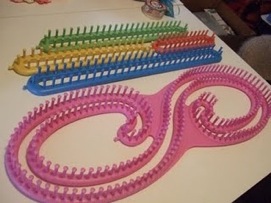 Via The Mad Scientist who sent this while in Toronto. Merci Buckets! Good lookin’ out!

To Knit or Crochet? That is The Question!