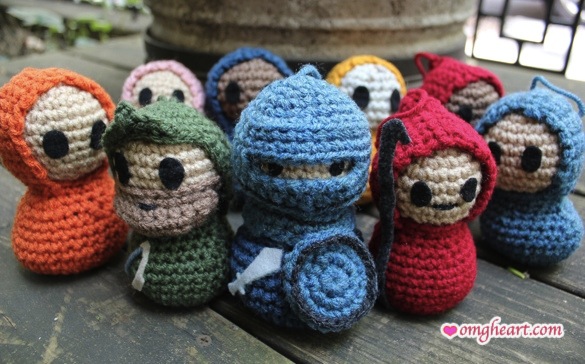 Finally my amigurumi army is complete! These crochet critters have been kicking around in my parking lot (or graveyard) of projects in progress since way before my National Crochet Month post. I first made them as party favors for my friend Shahina’s Christmas Party circa 2008. My original 12 crochet critters are now all over the world from Denmark to Singapore to England and all across the United States. This batch was started last year only to be completed last week! My new batch includes some surprise characters – The Gurk Heroes! 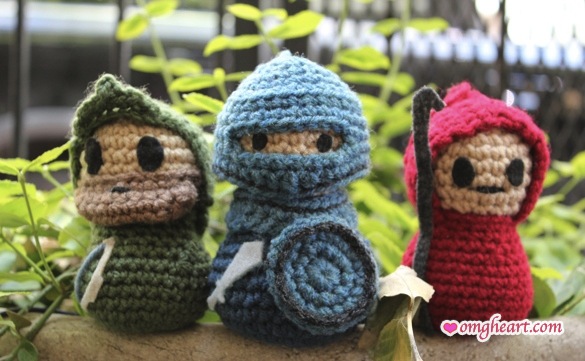 No, I did not name them. Who are they? These are the characters from the mobile game, Gurk ! They are the very same characters you’ll be playing in this 8-bit RPG game to explore The Wilderness, venture into the Gray Citadel, or hang out in Port Bristle. In short, Gurk is a game for your mobile phone. It’s a throwback to retro gaming that you can now play on your Android phone!

For all those Gurk fans out there who will naturally be reading this knitting blog – get ready to LOSE YOUR MINDS! Gurk II, the sequel to Gurk Original, just dropped a few days ago! Mushroom cloud! These are the characters from the original Gurk. Why do I care? The Mad Scientist made this game!

But first, would you like to make your very own crochet critters? These amigurumis make a great Beginner Intermediate project in nice bite-sized pieces. Also a great way to try out Circular Crochet or Crochet in the Round. The only drawback with these projects is in the assembly! The crochet part is easy! It’s all the finishing touches and details that take some special care. Each critter consists of 1 head (stuffed with poly-fill), 1 body (stuffed with beans), felt eyes (sewed on), and embroidery floss mouth. You can customize them from there on out.

I was at the local Borders Bookshop on a lark when I stumbled upon this book, Creepy Cute by Christen Haden. $10. The book itself is adorable, with great instructions, and a pattern for each of its many creepy critters. About 20 in all. My fave technique I learned from this book is the Magic Ring! All my creepy critters are based on patterns from this book! The Gurk Heroes are a variation on the the creepy critters you’ll find in the book.

Also, thanks to Mr. Gurk Alert himself, John Watkinson, for not only handcrafting Gurk and Gurk II but those darling felt weapons you see on each little Gurklet! 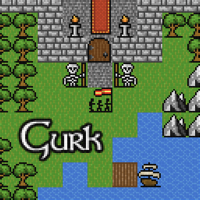 More About Gurk!
In the age of Xbox Kinects, PS3s, and Wiis – Gurk and Gurk II are throwbacks to 8-bit gaming. 8-bit RPG games to be exact. For your Android phones!

You will control 3 characters as you wander through the land of Gurk to battle marauding monsters, fight your way through dungeons and dragons, and discover new treasure. In the Gurk sequel, you will also encounter new NPCs to talk to who will give you quests to complete. Confetti!

Gurk is an original RPG written, designed, and developed by John Watkinson! This tour de force was inspired by his love of Ultima and Bard’s Tale II. I remember back in the day when Gurk only lived on a single crappy Nokia candy bar phone. Watkinson’s Nokia phone. That he took out of his pocket in the middle of a dim movie theater. With a screen the size of a postage stamp! Perhaps it was living on a few phones out in Japan, maybe Europe. But back then there were no app markets to be found and Europe and Asia led the free world in mobile technology. So only the truly hardcore managed to find it and download it. But that’s about it. I never played it during its J2ME days but the teensy world made up entirely of colored pixel blocks was cute!

Until one fateful Thanksgiving Day, circa 2010, when he decided to bring it over to Android! I believe he ported the whole thing over in one weekend. Or perhaps across a long weekend. Monstrous. Soon after Gurk got ported from ye olde J2ME (an old mobile OS. NO!) over to Android (YES! My mobile OS of choice.), the sequel came out – and smashingly so! 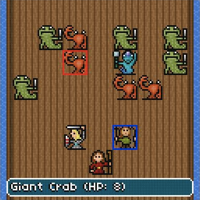 I love exploring the new maps, encountering new monsters, weps, and armor. Basically I like discovering new monsters, terrain, weapons, or treasures! And of course playing my new girl toons! Yes, G2 features a new cast of characters including what I like to call The Girls of Gurk! There are 6 new toons to choose from, 9 in all. And they feature 3 female ones! Hooray! You can mix and match them however you like.

You can also try your luck when picking your toons with the re-roll option! Re-roll to try getting the best stats possible for your starting players. As you level up, you will encounter more delightful denizens, graduate from Fish Oil Salve (blecch) to potions and jewels, wield fancier weps and armor, and gain access to new and exotic territories. There is also a whole cache of brand new bosses, dungeons, treasures… and food! Yes, there are provisions in the game now in the form of Jewels, Potions, and Salves. Mmm Mmm. 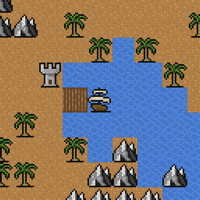 What else is new? There’s a ship, guys!! Where you can sail across the briny deep while fighting monsters right on deck. If you get bored or are feeling lonely in the land of Gurk, stop and say Hi! to some NPCs who can give you a little smarmy advice or a quest! Oh and one more thing – you can summon your own imps to help you fight!! Pets!! Check out the Gurk Wiki for some Tips & Tricks on gameplay and a rundown of new UI features.

The Music! Something Chiptune fans will especially appreciate. Gurk II includes an original score also by Watkinson himself. And is a swoon-worthy homage to Chiptunes circa late 80’s. And it’s good, guys! SCOOP: The soundtrack to Gurk II was originally composed in the mid-90s. He dug them up and decided to use them in G2. So actually, they were an homage created during the 8-bit heyday and therefore better classified as vintage! So these original vintage chiptunes are a super bonus IMHO that many otakus of the 8-bit RPG genre will appreciate. The final release version includes SFX too! I have yet to play the final release. But once I finish playing through beta, I will check it out! I don’t want to give up my OP Flame Chant just yet! Plus, my toons are looking sharp in their OP gear.

What are 8-bit games?
Think Nintendo NES. Yes, like Super Mario Brothers and Duckhunt! The pioneers of modern day personal gaming or home gaming consoles, first made popular in the late 80s. Or arcade games like Donkey Kong or Pac-Man. Some other notables include Sega and the console that sparked it all, Atari. Usually defined by pixelated graphics and rudimentary animations. Simple gameplay. Retro! Read all about The History of the Game Console on Wikipedia!

What are RPGs?
Role Playing Games. Which became more popular during the home console 8-bit revolution. Most notable are Final Fantasy, Legend of Zelda. The gameplay is turn-based which means it’s usually along the lines of “Do you want to enter the dragon’s lair?” Yes or No! “Press 1 to Attack” and so on. They usually include things like knights and dragons, quests and spells, swords and armor… RPGs back then also had the tendency to attract girl gamers, there weren’t many options that appealed to the handful of girl gamers in the 80s.

All modern day RPGs can trace their roots right back to role playing card games like Dungeons and Dragons. Yikes. RPGs today come in many flavors. And includes the modern day quintessential juggernaut of the genre, World of Warcraft. A suped up version of RPGs otherwise known as an MMORPG! Less turn-based but every bit the consummate RPG. It’s a living, real-time RPG where you can game with players from all over the world. It’s a sub-culture unto its own. 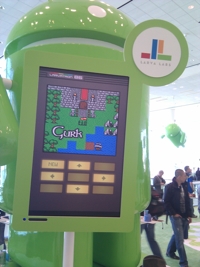 Meet the Developers
You can learn more about Gurk, John Watkinson, and Matt and John’s nerdery for profit – Larva Labs on their website. This duo of mobile software developers makes all kinds of apps for iPhone, Android, Sidekick, and iPad. Including the popular Androidify! Fun x 4 = All!

In the meantime, check out Gurk II on the big screen at this year’s Google Developer Conference, Google IO 2011. It was fully functional!