Must See: Crochet on the Subway 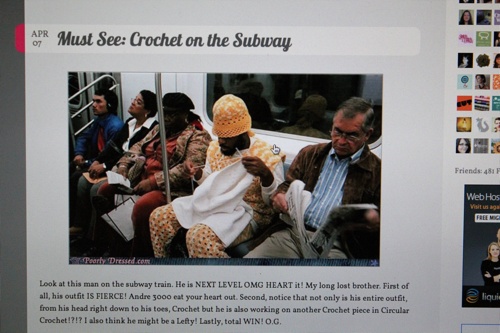 Look at this man on the subway train. He is NEXT LEVEL OMG HEART it! My long lost brother. First of all, his outfit IS FIERCE! Andre 3000 eat your heart out. Second, notice that not only is his entire outfit, from his head right down to his toes, Crochet but he is also working on another Crochet piece in Circular Crochet!?!? I also think he might be a Lefty! Lastly, total WIN! O.G.

Can someone tell me who this is? He’s on what looks like either a 4,5,6? BDFM? 7 Train? Must find out. Email me. “He looks like a mix of Andre 3000 & the dude from Yo Gabba Gabba. I totally want to be his friend!” -Poorly Dressed Blog Commentor

Please Note: Some not so nice news!
The photo in the photo above was originally seen on Poorly Dressed. That site led me to the alleged photographer of said photo leading me to include a credit to them as well.

I did not and do not know if that was the rightful owner of the original photo. It was merely mentioned in a comment on Poorly Dressed. I would have never found the photo or the credit to the photo if it was not for PoorlyDressed. So in good faith, I credited them both.

In an effort to find out more about this man, I contacted this person. Only to find that they did not like that I credited them both and unceremoniously requested I remove it simply for that reason. I didn’t love the manner in which it was requested but fair enough!

Except for one thing, the truth is neither the alleged photog nor their site formally claimed it as their own work with the proper rights associated. And property, especially photographs, do not necessarily belong to the person who took them nor give them the right to make such requests. Especially if they were commissioned by others or taken without the subject’s permission. This means that the photographer who took the photo may not have the right to decide how that property is used! Likewise, it’s just as fair and legal for you as a site owner or content creator to request a formal legal notice clearly stating the validity of ownership, rights, and requests before you have to comply. Especially if, like in my case, I noted and went in search of the proper source not just for “legal purposes” but purely from a creative standpoint. Lofty claims and requests in half-assed emails or throwing up an image on a website implying ownership does not necessarily denote legal rights. So it all takes some good faith on everyone’s part.

So in light of all of the above I have removed it. I had general good intentions towards not only where I found the original photo, but who took it, and most importantly the artist featured in it. What was meant to be a positive thing has successfully turned into a negative. Too bad!

For the record, the photo shown above – was taken by me of my own accord. It’s a photo of my computer showing my website that displayed the photo that was in question.