Imagine if the clothes you wore were not only eco-friendly but eco-cleaners? Above is Professor Helen Storey, a London-based fashion designer, with her eco-cleaning jeans that purify the air as you wear them. Yes, her jeans which she’s been testing for 2 years claim to clean the air of nitrogen dioxide, a harmful air pollutant.

Helen along with Tony Ryan, a professor of Physical Chemistry at Sheffield University interested in polymers and soft nanotechnology, developed a fabric treatment that can turn everyday clothing like denim jeans into air pollution cleaners! 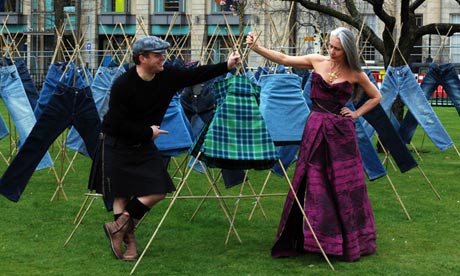 Helen Storey and Tony Ryan with their pollution cleaning jeans.
They will be at the Manchester Science Festival. This weekend Oct 27 – Nov 4 2012.

How does Catclo work?
“Catclo contains nanoparticles of titanium a thousand times thinner than a human hair. When clothes are washed with Catclo these particles are deposited on to the fibres of the fabric. When the catalysed clothes are worn, light shines on the titanium particles and it excites the electrons on the particle surface. The excited electrons try to react with something and the first thing that they see is oxygen because it’s in the air just above the surface of the particle.” — Tony Ryan

It’s not available yet but it’s in the works. Read more about Catclo, just how much air it cleans, and if there are any drawbacks. Check out their website, Catalytic Clothing for more about their project.

Oh the possibilities!
Just think. How much pollution in NY could be offset if just the crowds of people that jam up Times Square alone (Everyday during rush hour? During the holidays? On New Year’s Eve?) were all wearing eco-cleaning clothing? In Los Angeles? Tokyo? Shanghai? Delhi? Or any high population modern city where human traffic could actually be used for a practical purpose?

You don’t even have to be wearing it! Perhaps flags, curtains, patio furniture upholstery, any textile that sits outdoors can be turned into air pollution cleaners!

The simple act of line-drying your laundry in the sun could double as air pollution cleaners too. Anything from bed sheets to table cloths, towels, curtains whatever that can be machine-washed and line dried would work too. It could not only help offset any pollution caused directly or indirectly from machine-washing clothes but it also saves energy from not having to run the dryer.

On an industrial level, textile manufacturers could potentially offset their entire process if the fabrics they worked with were all treated with this product while working? Before being shipped? Who knows!

It’s a cool concept and hopefully will not only become a reality but open doors to new concepts and ideas for other eco-practical solutions. Read more about Sustainable Fabric and E-Textiles where technology meets textiles in some of my previous posts.

What is Nitrogen Dioxide?
Nitrogen Dioxide or NO2 is a toxic emission most commonly produced by cars, airplanes (or any engine that uses gas to run), power plants, gas heaters and stoves etc. It’s what most people are referring to when they say air pollution! It’s in general one of the largest man-made air pollutants in our eco system. It’s that haze you see over LA on an especially polluted day.