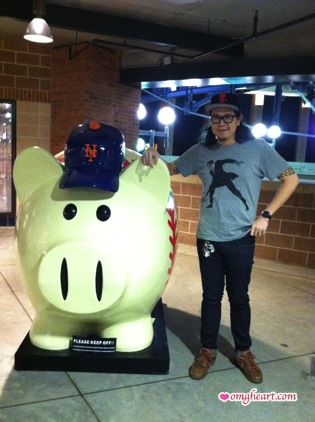 At The Mets! No, that’s not me! But on Sun, June 3, just days after Johan Santana pitched the first no-hitter game in Mets History on June 1, 2012, I went to my first Mets Game in a long time!

The Mets are my hometown team and it was a very special night. Not only were we sitting in a giant section of furiously knitting (and some crocheting) Mets fans who were there for the Stitch N’ Pitch but The Mets had a special ceremony to induct one of their own into the Baseball Hall of Fame! It was so much fun even though we were literally sitting out in Left Field in the nosebleeds.

I forgot to bring my camera (duh!) and didn’t take pics (boo!). So the pic on the left was the best I could do! But it was so cool (and kinda wacky) to see a whole section of knitters and crocheters at the game.

GAME! Mets vs. St. Louis Cardinals, Mets win 6-1! Let’s Go Mets!! The game was almost a shut out until the Cardinals eeked out a run.

HISTORY! John Franco, Pitcher, was inducted into the Baseball Hall of Fame at this very game. The Brooklyn-born NYC native gave a very moving and humble speech. He was known for wearing an orange shirt over his uniform to commemorate his father who was a NYC sanitation worker. We liked the guy! Daryl Strawberry and Dwight Gooden were there too!!

IRONIC! Carlos Beltran was playing too. But for the Cardinals! BOOO. He used to play for the NY Mets for a long time!

FUNNY! Scott Stapp sang “God Bless America” at the 7th Inning Stretch (He sings really weird!) and we got to see Mr. Met too!

FOOD! Oh boy! Citi Field had awesome food choices like Shake Shack and lobster rolls. But we ended up eating standard fare like a hot dog (which we shared), cheeseburger, chicken fingers, onion rings, french fries, and of course a soda!

FREE! We all got free collectible commemoration hats for the event!

Citi Field was a really great experience. I grew up with The Mets and Shea Stadium was an institution in Queens. So I wasn’t very happy when it was bought by Citibank and turned it into Citi Field. It used to be all blue with giant neon baseball players on the outside that you could see from the highway or on the 7 Train at night. However, we had so much fun exploring it, the different shops and gourmet eateries, and its beautiful architecture. Well planned out, spacious, lots of fun memorabilia and history to see. I liked it.

A Note About Beginning Sewing