Etsy or Regretsy? Not So Handmade Markets!

by OMG! Heart
No Comments 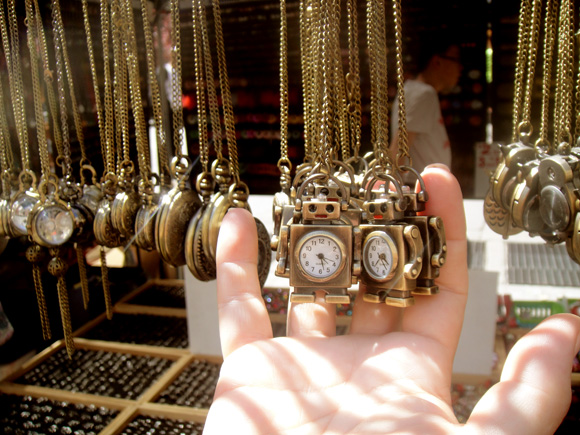 Robots in Times Square also sold on Etsy from Regretsy.com

When Etsy first hit the scene circa 2005 or so, I remember where I was, what I was doing, and who I was talking to about it. Melodramatic, yes, but it was a big deal for me back then (as a tech professional, indie shopper, and crafter) and quite the nifty concept. An online market with a focus on handmade, quality handmades. What set it apart for me was that it not only gave everyone access to local handmades but it in turn gave handicrafts and handmades a better reputation. It wasn’t that long ago that the majority of handmades had a bad connotation for being shoddy and unskilled. You’d have to wade through so much bad to get to one decent, it just wasn’t worth it. It used to be only those in the creative or artist communities knew where to look for and how to spot the truly exquisite things.

To put it ironically, Etsy brought handmades to the mass market! It blew up into what it is today, a widely popular online shop where independent crafters can easily sell their wares. Simply register and start posting up your stuff. Fees, if any, were nominal. No need to set up shopping carts or payment systems. Or know much about webpages and websites. It was easy and accessible. It was a DIY business for DIY crafts that gave you access to a wide global audience.

For shoppers, it was a hub to find wonderful new artists and their fresh wares connecting an average shopper to an artisanal community they may not have found if not for Etsy. It brought say Brooklyn local to the web. You no longer had to live or shop in Brooklyn to get a taste of the wares it had to offer. It gave shoppers from all over the world the opportunity to shop similar experiences and at much more affordable prices too since the cost of setting up shop was low.

It grew so popular that Etsy Labs, a subsequent Etsy Craft School of sorts, and its collab with 3rd Ward emerged and echoed its dedication towards handmades. Etsy brought the handmade market to the forefront on the internet for many crafters and helped ring in a new era for handmades and DIY.

These days Etsy is far from strictly handmades and independent artisans. It’s overrun with resellers who claim their item is handmade when it blatantly does not look handmade and can be bought in bulk from wholesaler websites! Or is ripped off from another website and passed off as their own work. It’s now a free for all marketplace not much different than Ebay. Except worse. It runs under the guise of being a handmade marketplace. Whereas Ebay makes no secret that it’s an open free for all marketplace period.

Even worse, Etsy censors comments and feedback that “call out” a shop owner who tries to pass off someone else’s work as their own personal work! That shop remains up and running, passing off those same goods, while the commentor is either banned or kicked off.

Someone’s pulling the old “switcheroo” as they say.

Etsy not only claims to be a handmades-only marketplace but a patron of sorts for the handmade arts. Yet we see examples like the above. To me as a consumer, it’s all misleading. Kind of like someone trying to pass off gold-plated for solid gold.

To artisan crafters and shop owners, it under cuts their sales and bottom line. Who can compete with mass-made items being sold for a fraction of the cost? I, as a consumer, may think why pay more for that handmade when this handmade is cheaper? It’s also sleazy to pose as an artisan when you are clearly not.

In the end, it’s just plain wrong for a shop/owner to make false claims whether it be about it being handcrafted or eco-friendly. And it’s doubly wrong for Etsy to allow it especially if they are well aware of it. And let’s face it, if there’s nothing genuine about the handmades themselves or the marketplace that features them, then where is the value in that?

Many shop owners and shoppers are also still under the impression that if it’s on Etsy, its a bonafide handmade. Shoppers may not have such a keen eye for truly skilled handmades and be duped into thinking they’re supporting a local artisan’s passion by buying their wares.

At the same time shop owners may feel stuck. It’s still a wildly popular marketplace where shoppers can seek artisan wares and a very powerful forum for shop owners. Yet genuine artisans can feel that market is no longer as relevant for their wares because they are not competing on level ground but with shops that are exploiting the system.

How can Etsy fix this?

PICK ONE! Make it a handmade marketplace only, with a strict verification process. OR. Make it a free-for-all marketplace just like any other online market place and let that be clear! Don’t pose as a handmades champion and marketplace, gain popularity as such, then exploit it by pulling the old switcheroo.

Maintain some credibility! For example, shop owners who are “called out” for being resellers should not be able to continue to claim or imply their items are handmade by them, if they are not! That is called:

Their shop should be removed or forced to correct false claims. It’s also unethical to exploit the fact that sometimes the lines of handmade are blurred. So perhaps the item is indeed “handmade”, perhaps from India. It’s technically handmade. But it is not handmade by the shop owner who claims they are the craftsman. This too should be clear. If it’s handmade in India then say so. “Handcrafted in India”. Done.

That same reseller who was called out even went as far as to threaten commentors into keeping quiet! It was a dramatic controversy that eventually ended somewhat with this statement from a well-respected attorney on blogger rights and freedom of speech. His statement is interesting too because it clarifies that comments on goods and services are protected by freedom of speech. Which likely kicked off a large-scale Etsy clean-up considering comments (not unlike reviews) aren’t slanderous at all (if in fact they’re true) and perhaps suppressing these comments, opinions, and reviews are what’s truly unethical.

These days Etsy flip flops on what it’s real focus was and is, they say it was never strictly a handmades marketplace to begin with (Not True. It also did and still does sponsor many community crafting events to help foster things like independent arts! Sure it’s all part of very slick marketing and nothing’s wrong with that! Except until it further perpetuates an already shady-ish image). And pretty much threw the handmade artisan community that made them so popular in the first place under a bus by giving resellers and fabricators equal validity.

How about moderating shop owners and their claims?? Especially when the Etsy community does it for them. By providing verifiable links straight to the same mass-produced items that a reseller is claiming as their own creation? Etsy is great at moderating comments in their forums, moderating users who recognize a fake for a fake right out of the forums! But not so much shop owners that make dishonest claims. Ironic.

In my opinion, Etsy has lost a great deal of its original appeal and much of its credibility. That appeal that came with being a handmade only marketplace. Where you didn’t have to wade through endless dubious offerings just to get to the handmades. An online marketplace that could potentially put you in touch with local artisanal wares from your backyard to Timbuktu. It was hip and fresh. And genuine. A tool that gave most artists a voice and a way to advertise their wares. It’s not an Ebay, where it’s understood that buyers shop with a wary eye. And it’s not necessarily the reseller’s fault considering Etsy seems to protect their claims.

Enter Regretsy or the “Un-Treasury” as I call it.

Regretsy.com, where I got most of my fuel for the above fire, is all about the shortcomings about and found on Etsy. Its satire ranges from featuring quirky notables to whistle blowing to blatant bullying! It sometimes highlights (roasts) the dregs found on Etsy. It’s an Etsy junkyard of sorts, a reverse Etsy Treasury or “Un-Treasury” I like to call it. It’s a harsh site with a fanatic following. I don’t always love the Regretsy harshness but I do like its honesty. Part of me agrees that some of these shop owners have some nerve trying to sell outright garbage half-cobbled together as art… But the other part of me says, well at least it is most definitely handmade… And at the very least art, like beauty, is in the eye of the beholder. Check it out and make your own conclusions!

UPDATE: Jun 6, 2012 – The saga finally ends for the furniture reseller mentioned above by them closing their Etsy shop! They’ve re-opened shop elsewhere minus the claims about being eco-friendly or handmade!