OMG! Heart goes to The Frieze 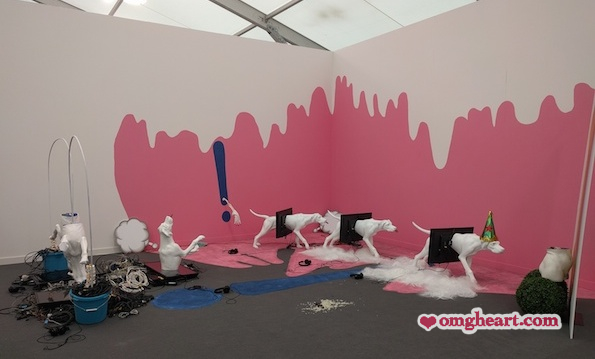 Spring Frieze came to town and my buddy treated me to a day! Frieze, an art fair consisting of galleries from around the world, features leading contemporary and emerging artists. Here are some notables from the Frieze.

Maurizio Cattelan, Italy, featured a live donkey serenely eating hay under a crystal chandelier entitled Warning! Do Not Enter…. It was shut down the day after we were able to view it. The donkey’s name was Gabriel. His owner was watching over him from behind the exhibit despite it being controversial. 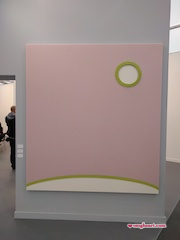 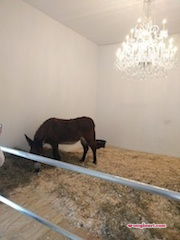 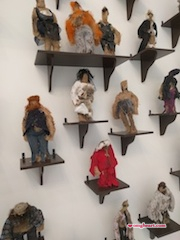 Gavin Brown, USA, had a piece entitled Enterprise had a folk art feel and was what seemed to me like modern day voodoo dolls. Made of burlap and mixed media.

Erwin Wurm, Austria, had a “painting” made entirely out of knitted wool entitled Mental Pink.

Damien Hurst, UK, was featured by Gagosian Gallery. His pieces included a disc made of dead bees (or flies), a mosaic made entirely of butterflies, baby sharks suspended in solid glass, and what I think was a baby ram with horns painted gold also suspended in solid glass. All. Real. *shudder* Conceptually distasteful yet elegantly executed… 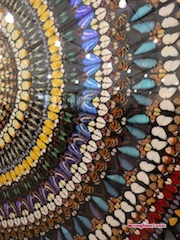 BMW Series 7 was there showcasing a lovely car. I hopped into it for a demo of probably the coolest car I’ve been in. Most, if not all, the dashboard/console could be controlled with hand gestures in mid-air (think Minority Report), touchscreen panels, or even use your finger as a stylus to pen in the place you want your GPS to navigate you to! With the flick of a wrist you could control your car’s 360 camera to check out how close to the curb you parked! It also included a super cool neon detailing in the paneling that could be changed to suit your mood from lavender to green to ombre. Sounds tacky yet somehow quite tasteful.

About The Frieze – Randall’s Island, NYC, May 5-8, 2016
The Frieze is an art show that happens in London, New York, and Berlin which hosts a collection of art galleries from all over the world. Catering mostly to art collectors, it draws independent collectors to celebrities to those simply looking to see some contemporary art. Some serious collectors fly in just to do some shopping. $$$$… The art ranges from avant garde and performance to mixed media and interactive to classic art forms. Some of the actual artists featured by a gallery were also there in person. There were around 200 galleries featuring over 1000 artists. 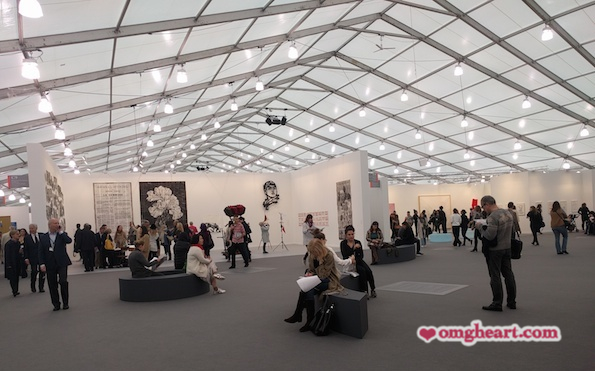 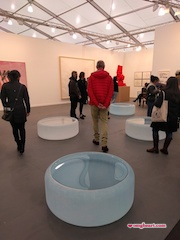 The show was enjoyable! Not only was the art beautiful but the gallery spaces were each individually architected to showcase the artists and work with the event space overall. It was all beautifully laid out and easy to navigate. With many spaces to sit, relax, have some coffee, a glass of wine, a cold beer. An outdoor beer garden, VIP lounges, reading room, and many artisan food and drink purveyors were there. Some of the best NY has to offer, like Marlow & Son, El Rey, Roberta’s, Parlor Coffee etc. Yum Yum. It drew a well mixed crowd of independent art collectors, hipsters, artists, etc. I didn’t spot any celebs since the days I went were open to the public but it was fun people watching! Read more about the Frieze at Frieze.com.

The fair took place on Randall’s Island, just over the bridge along the East River, where it not only hosts a psychiatric hospital but also a water treatment facility and FDNY training center.

Houston, We Have A Problem… I Got Hacked!